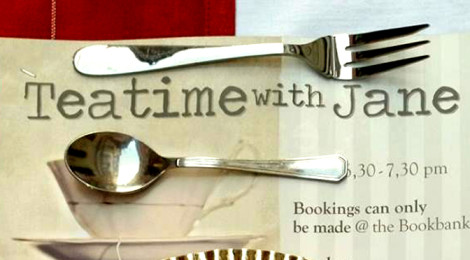 From October to June, the Bookbank bookshop will move to the English countryside for afternoon tea once a month on a Friday afternoon (h. 18.30-19.30). Surrounded by a real English atmosphere with tea and cakes, cups and saucers and a good book, we will spend a pleasant afternoon reading and chatting in English… with Jane!

19 – 26 October: Chocolat – Joanne Harris
Witches and chocolate! – When an exotic stranger, Vianne Rocher, arrives in the French village of Lansquenet and opens a chocolate boutique directly opposite the church, Father Reynaud denounces her as a serious moral danger to his flock – especially as it is the beginning of Lent, the traditional season of self-denial. As passions flare and the conflict escalates, the whole community takes sides. Can the solemnity of the Church compare with the sinful pleasure of a chocolate truffle?

23 – 30 November: Birdsong – Sebastian Faulks
exactly 100 years since the end of World War I – A novel of overwhelming emotional power, Birdsong is a story of love, death, sex and survival. Stephen Wraysford, a young Englishman, arrives in Amiens in northern France in 1910 to stay with the Azaire family, and falls in love with unhappily married Isabelle. But, with the world on the brink of war, the relationship falters, and Stephen volunteers to fight on the Western Front. His love for Isabelle forever engraved on his heart, he experiences the unprecedented horrors of that conflict – from which neither he nor any reader of this book can emerge unchanged.

18 – 25 January: Atonement – Ian McEwan
it’s time we did some Ian McEwan! – On the hottest day of the summer of 1935, thirteen-year-old Briony Tallis sees her sister Cecilia strip off her clothes and plunge into the fountain in the garden of their country house. Watching her too is Robbie Turner who, like Cecilia, has recently come down from Cambridge. By the end of that day, the lives of all three will have been changed for ever, as Briony commits a crime for which she will spend the rest of her life trying to atone.

15 – 22 February: 1984 – George Orwell
70 years since it was published in 1949 – Hidden away in the Record Department of the sprawling Ministry of Truth, Winston Smith skilfully rewrites the past to suit the needs of the Party. Yet he inwardly rebels against the totalitarian world he lives in, which demands absolute obedience and controls him through the all-seeing telescreens and the watchful eye of Big Brother, symbolic head of the Party. In his longing for truth and liberty, Smith begins a secret love affair with a fellow-worker Julia, but soon discovers the true price of freedom is betrayal.

22 – 29 March: The Tempest  – William Shakespeare
this is more than one teatimer’s favourite Shakespeare play! – The sorcerer Prospero, rightful Duke of Milan, plots to restore his daughter Miranda to her rightful place using illusion and skilful manipulation. He conjures up a storm, the eponymous tempest, to lure his usurping brother Antonio and the complicit King Alonso of Naples to the island. There, his machinations bring about the revelation of Antonio’s lowly nature, the redemption of the King, and the marriage of Miranda to Alonso’s son, Ferdinand. Considered to be Shakespeare’s last play.

Monday 29 – Tuesday 30 April: The Guernsey Literary and Potato Peel Pie Society  –  Mary Ann Shaffer
A film starring Lily James to be released  2018 – It’s 1946. The war is over, and Juliet Ashton has writer’s block. But when she receives a letter from Dawsey Adams of Guernsey – a total stranger living halfway across the Channel, who has come across her name written in a second hand book – she enters into a correspondence with him, and in time with all the members of the extraordinary Guernsey Literary and Potato Peel Pie Society. Through their letters, the society tell Juliet about life on the island, their love of books – and the long shadow cast by their time living under German occupation. Drawn into their irresistible world, Juliet sets sail for the island, changing her life forever.

24 – 31 May: poetry by Alfred, Lord Tennyson
As Poet Laureate during much of Queen Victoria’s reign, Alfred Lord Tennyson’s spellbinding poetry epitomized the Victorian age. With a literary career spanning nearly sixty years, Tennyson is one of the nineteenth century’s greatest poets, Tennyson’s most famous works include Maud,  The Lady of Shalot , Morte d’Arthur, Ode on the Death of the Duke of Wellington, and the patriotic Charge of the Light Brigade,

June: Little Women – Louisa M. Alcott
A timeless classic – The timeless tale of four sisters – Meg, Jo, Amy and Beth – experiencing both hardship and adventure in Civil War New England. Though the March family may be poor, their lives are rich with colour, as they play games, put on wild theatricals, make new friends, argue, grapple with their vices, learn from their mistakes, nurse each other through sickness and disappointments, and get into all sorts of trouble. In this simple, enthralling tale, Louisa May Alcott created four of American literature’s most beloved “little women”.

Teacher: Jane Upchurch
Cost per lesson (including tea and cake): €18
For information: info@bookbankpiacenza.it

Just to remind you of Bookbank’s Teatime rules:

– there are ONLY 10 places for each meeting
– the cost remains 18 euros, because we believe that good things should carry on and because the sacrifices we make are worth it to see you smile.
– you can consider your place booked ONLY AFTER you have paid.
– you will ONLY be refunded if you can’t make a meeting IF you give me 15 days’ notice.
– You can ONLY change the date of the meeting you have booked, IF you give me 15 days’ notice and ONLY IF the group on the chosen date is not already full.
– You can give your place to someone else, or change places with another person in another group… but you MUST remember to let me know (so I know who is coming and who isn’t!)